Remember the first time you went to the circus?  If you’re like most, the high wire act was the most captivating thing you saw.  It dangerous…exciting…full of energy…and the key to it all was a state of equilibrium called “balance.”  Believe it or not, the same can be said of your career, business, or family life.  The concept of balance is incredibly simple, but extraordinarily difficult to achieve.  It also limits your capacity for doing…let’s take a look at why, and some actions you can take to achieve balance.

The following graphic depicts the average person’s perception of a balanced life. 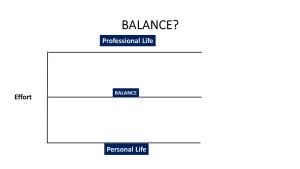 Normally when we think of balance, we imagine a straight line with an equal level of effort applied to our professional and personal lives.  This is great in theory, but it simply doesn’t work that way in the practical world.  This graphic more accurately depicts balance: 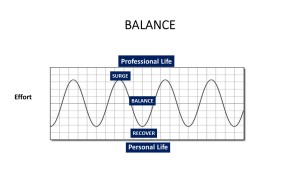 When you’re starting a new career or a new business, the establishment process takes a lot of focused attention.  If you’re rolling out a new product or have an important project that could be a game changer, it drives a significant level of effort.

The level of effort I just described is commonly referred to as a surge.  To achieve anything significant, there are times when we have to surge.  Most people understand surging and are willing to do it, but the tricky part, unless you’re a critical doer who understands time, is how to come out of a surge.

A surge is a pace that can’t be sustained for the long haul.  When you’ve accomplished the goal of a surge, there are two choices…call that level of effort the “new normal” or make a choice to recover.  If you don’t understand time, it’s tempting to redefine a normal pace…and it’s a choice that will ultimately undermine progress personally and organizationally.  Without a period where people can reestablish proportion between time spent earning a living and time spent on things that give life special meaning, effectiveness diminishes to the point of detriment both professionally and personally.

Here are some tips that you should consider to drive balance as you deal with the ongoing tug between level of effort given to personal and professional lives.

Critical doers, here’s your challenge as you walk the high wire trying to balance your professional and personal lives.  First of all, don’t lose hope if you’re feeling out of balance…it’s perfectly normal, and there are times when it becomes necessary but there is a way back.  If you do a good job of managing expectations and stay true to your word, your capacity to do grows exponentially.  Communicate, plan, prioritize, and fight your way to achieving a lot of critical doing for the long haul.  It’s what a critical doer would…do!