A Critical Doer controls what is theirs to control

Present Shock is an attempt to explain the unintended consequences of the information age. Rushkoff has compiled an impressive collection of stories and case studies to support his main points about rate of change and the impact on society. 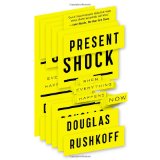 Rushkoff has gained considerable acclaim with this book, so I was anxious to finally crack the cover.  I was hoping for an analysis of root causes and solutions to mitigate the problems of information overload but unfortunately came away empty.

Rather than analysis, I found 269 pages of Critical Doer kryptonite:  problem admiration. To use the author’s words, “narrative collapse” happens when you come to the realization that there will not be answers…simply observations.

Problem admiration is a flawed line of thinking that spends considerable energy building a narrative of the complexity and scale of a problem.  The narrative builds to admiration much like describing a work of art or an inspired athletic performance.  There is never a transition from “descriptive” to “prescriptive” which makes problem admiration an apropos term because no action occurs.

At least one salient point comes toward the end in describing “apocalyptic’ moments as a beginning rather than the end. We have evidence from history…The Civil War was followed by a period of growth and expansion…World War 1 gave way to the roaring 20s…the Great Depression and World War II saw “The Greatest Generation” lead the greatest period of growth in history. The point is…the cycle of prosperity, complexity, and rejuvenation…is not new to us. A transition from Present Shock to future solutions could have made this a seminal work rather than a commentary of the times.

Present Shock effectively highlights legitimate concerns of the digital age, but admiring the problem doesn’t provide a course of action to fix those problems and forge a bright future. The lesson for Critical Doers is that admiring a problem doesn’t solve problems.  Stay true to our philosophy of controlling what is yours to control in order to find solutions and opportunities to change the strategic landscape…rather than admiring the problem all the way to failure.  It’s what a Critical Doer would…do!