In last month’s Critical Doer Deep Dive, we discussed a framework called “the design V” for developing new concepts and turning them into action.  Theory is a good place to start as it builds a solid understanding of an idea.  But along comes the practical world adding the elements of time and competition.  In any walk of life, actions have a season of relevance.  Those who develop strong concepts and put them into action ahead of others are the consistent winners…and we call them Critical Doers.

In this deep dive, we’re going to add another layer to the design v that addresses the elements of time and competition.  This layer is complementary to the steps of the design v, will help you gain velocity in concept development, and ensure your great ideas come to life ahead of the competition to gain the coveted property of relevance.

The added layer comes to us from an iconic figure of United States Air Force lore…Col John Boyd.  In his seminal work entitled “Discourse on Winning and Losing”, Col Boyd invented a model that showed the path to thinking faster than an adversary.  Thinking faster preserves the initiative and forces an opponent to be reactive (and at best defend).

Boyd’s model involves four steps:  observe, orient, decide, and act.  The first letter of each word spells “OODA” and the model is commonly referred to as the “OODA loop.”  The loop part comes from Boyd’s position that the four steps are run in a cycle meaning once you get to “act” you go back to the beginning with “observe.”  The person who is able to run the loop fastest and most often is going to win because you are mentally outmaneuvering an opponent.

Here is a graphic from snipview.com that will help you visualize the OODA loop concept:

In the observe phase, the graphic shows collecting information about the operating environment from a wide array of sources.  One misconception of the observe phase is that it is implicitly reactive, and nothing could be further from the truth.  Observation can easily be about the future and creating an opportunity.

One of the most important points you can take away from the deep dive and the OODA loop discussion is that critical thinking, regardless of the model that describes it, is not bounded by time.  Your own imagination that generates a perception of what is and is not possible is the only thing that puts bounded constraints on the outcome of critical thinking.

Where the observe phase focuses on data, the orient phase begins to add context…in other words, what does the data mean.  There are a number of considerations listed in the graphic to orient your thinking and the list is not all inclusive…case in point is that education is not specifically listed.  I know of no greater weapon to add context to data than a broad education that has trained a mind to break the shackles of limited possibilities.  The more possibilities and layers of context, the greater the number of choices you can produce.  The greater the number of choices, the more precise each choice can be and the probability of effectiveness increases.

A few suggested readings you may want to consider in your own personal journey to grow as a Critical Doer and increase your capacity for orientation on a problem or opportunity are:  Chip and Dan Heath’s Decisive and Switch, anything you can read by Socrates or things many authors have written on the Socratic method of reasoning, Nassim Nicholas Taleb’s The Black Swan, and Daniel Kahneman’s Thinking Fast and Slow.

Following observation to gather data and orientation to add context for the formulation of choices, decide is the third phase in the loop.  In a previous deep dive we covered extensively how to do comparisons of choices to determine which one is best.  Since we’ve covered that ground, what I want to call your attention to in the graphic is the feedback line that runs from decide back to observation.

The feedback line is important in dispelling a common misperception of the OODA loop.  Many believe Boyd’s intent was that each step of the loop be run in every iteration of thinking that occurs on a problem.  Clearly, Boyd’s intent is that data is generated from the moment of first decision that adds to the existing body of knowledge.  With a greater body of knowledge to turn unknowns into knowns and refine choices (part of the Critical Doer definition of risk management), decisions come faster…which leads to faster actions.

This is where the OODA Loop becomes exciting and a powerful weapon to a Critical Doer.  Look at the top of the graphic and see that there is now a direct line running from observe to act.  Is the light bulb coming on now?  Boyd’s intent is that largely orient and decide are done before going into combat.  He could simply observe and act so that his actions were always faster than an opponent.  It may surprise you how much you actually practice this every day.

As you’re driving down the road, you are observing as you take in data from the front window, the side windows, the rear view mirror, the side mirror, the traffic reporter on the radio, traffic alerts on your GPS, the performance of your engine as indicated on the dashboard, your own perception of the car’s performance through the insight you’ve gained from repetitive use, etc.  As you gather data, you orient yourself to the environment that the left lane is empty and in that moment subconsciously made a decision that you could pull into that lane if you desire.

Now a new piece of information comes along…another driver carelessly pulls into your lane.  Upon that observation, you immediately act and pull into the left lane quickly enough to avoid an accident.  A driver not as diligent as you that needed to process all that information while touching each step of the OODA loop would likely not escape a mishap because the action could not have occurred quickly enough.

Let’s bring the OODA loop discussion back home to the design v and how it applies to competitive business and organizational management.  The OODA loop actually has a tight correspondence to the steps we covered in the last deep dive on the process of concept development.  In applying the design v with an OODA loop overlay, you will not only smartly develop concepts but will do it at a pace to ensure relevance and keep the competition reactive to you.

Here’s the design v with the steps of the OODA loop added: 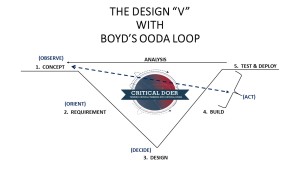 The observe step of the OODA loop corresponds to the concept phase where data is pulled to formulate an idea for a product, service, or program.  If you remember from the previous deep dive, the data you’re gathering in the observe phase comes to a nexus in answering the crucial question of “why.”  From our practical example, the “why” in gathering data on traffic as you were driving was to avoid an accident.

The orient step corresponds to defining a requirement where we determine “how.”  From contextual elements of thinking you gain clarity and precision with a solution that produces a “how” to addresses “why.”

The decide step corresponds to the design phase of development.  You have to decide upon a course of action to design it, but remember our discussion about the feedback loop that runs from decide back to observe.  During the design phase, new information can be uncovered that either invalidates your concept or provides an even greater opportunity after making adjustments.

Finally, the act step corresponds to the build and test/deploy phases of development.  These phases as well provide feedback to the observe step that over time will allow you to collect data and know how to act at the speed of thought.  Cutting edge organizations that are consistently first in the marketplace are having discussions about how to create while everyone else is having a discussion about how to compete with them.  Whether they call it the OODA loop or not, this is the type of thinking that makes them market leaders.

Critical Doers, now comes the time for a challenge and some serious reflection.  In your current professional situation, do you and your leadership talk about how to compete with others or how to create?  In your personal investing…take a look at the CEO’s statement to shareholders in the latest annual report.  Does the person at the top talk about competing or creating?  In either case, if you’re talking about competing alone and conceding definition of the future to others it’s time to make a change in your thinking to define the future before your competition defines you.

Put the concept development model together with a system of thinking that will give you velocity in making decisions.  Most importantly, it puts the opportunity to define your own future back in your hands.  Remember one of the central tenets of Critical Doer philosophy…the only future we have is the one we’re willing to make for ourselves.  Turn critical thinking into positive action today; it’s what a Critical Doer would…do!

Reminder:  you can get automatic updates from The Critical Doer by using the subscription widget at the top of this post.  You can also follow on Facebook, Twitter, and Google+.  I also encourage you to let me know what you think of the posts or share a story of your own using the comments section or email me directly at criticaldoer@gmail.com.